Another great example of the transformative power of the arts and of the potential life changing role of teachers.
"Art changed my life, and now I know it can change other lives."
David Garibaldi is a performance artist with a calling. Garibaldi dances on a drop cloth while two DJs and drummer play hip-hop music. Compact and energetic, he grabs paintbrushes as he moves. Holding one in each hand, he starts making brush strokes on a life-size canvas board. As he dances, a portrait slowly emerges before your eyes: Martin Luther King Jr., Jimi Hendrix, Madeleine Albright. He calls the piece "Rhythm and Hue." He frequently performs at schools. And during the show, he tells the students his story urges them to stay in school. He was failing in high school; he was more interested in painting graffiti late at night in rail yards and back alleys. That was true until his junior year: "That’s when I walked into the classroom of . . . Mr. Sullivan..." Over the next few years, Garibaldi learned animation, taught himself formal painting, and began creating his hip-hop performance show. He’s toured with the Blue Man Group, performed during halftime at sporting events, and took his act to Europe. A documentary about his work, Walking Dreams, has been released in 2009
-- from Edutopia 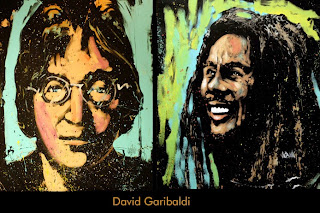