Mexican artist Pedro Reyes wants people to think about the availability of guns in the United States, and the impact that has in Mexico. Reyes believes art should address social issues like gun violence, even when they're difficult and controversial. His first project began in 2007. As part of a campaign to curb shootings, the city collected 1,527 guns. He used them to create art. "Those 1,527 guns were melted and made into the same number of shovels," he says. "So for every gun now, there's a shovel. And with every shovel, we planted a tree." Then Reyes worked on a new project. It is one that transforms guns into something more musical. A few years ago, a government agency in Mexico gave Reyes 6,700 guns that had been confiscated from criminal gangs and rendered inoperable. Since then, he's been turning them into electric guitars, violins, flutes and percussion instruments. "To me at least," jazz grad student Zach Pedigo says, "the concept is about taking weapons that are destructive in nature and chaotic and trying to make them for something else. So, instead of objects of destruction, they become objects of creation." That's exactly Reyes' point. Art, he says, is about transformation. "It's the same metal," he says, "but it is no longer a gun. It's now a flute or a guitar." Asked whether that's an improvement, whether musical instruments are better than guns, Reyes responds, "Yes, I do believe guns are bad. Because, you know it's an industry that to thrive, it needs conflict." (extracts from "Artist Transforms Guns To Make Music - Literally" by Greg Allen)
-- read full article by Greg Allen on NPR here
-- go to Pedro Reyes website 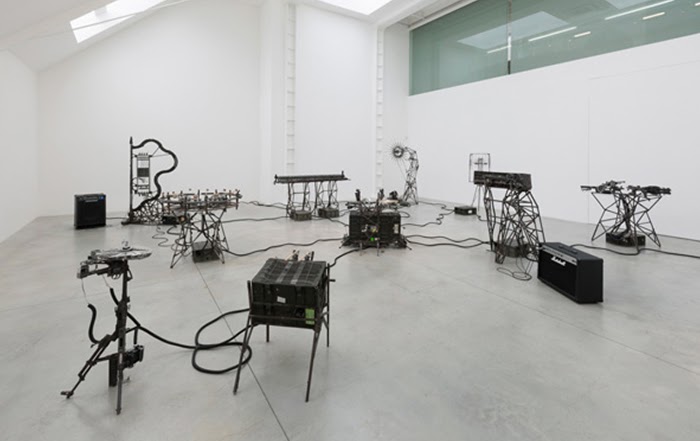